Consumers are subjected to great inconvenience by various charges levied by banks. “Banks have extorted over Rs.50,000 crore from customers in dubious levies and charges. Public Sector Banks (PSBs) alone had collected Rs. 10,000 crore as penalty from customers for not maintaining a minimum balance in their savings account and for cash withdrawals beyond three times. This data came to light through a question in Parliament”, reported Money life.

Payments Banks, a new model of banks conceptualised by RBI, came into existence in 2015 and is popular now.

Demonetisation happened in 2016, the effects of which are being strongly felt even today.

How many of us are aware that the above three are linked? This article aims to highlight the linkage between banking charges, payments banks, and demonetisation and the conspiracy behind it.

Keeping the above statistics in mind, it seems clear that it is not possible to arrange housing, food, clothing and also save so that minimum average balance of about INR 3,000 can be maintained in a nationalised bank’s savings account. few services have now been made mandatory by the banks (such as debit cards and SMS updates for transactions), and all of these services are charged to the customers, including GST

Banks borrow money from depositors and lend it to bank’s borrowers, and in the process make money as a result of the spread between the average lending rate and deposit rate. The spread itself is due to the fact that the banks lend at higher rates compared to what they pay to depositors and this spread has been more than sufficient to meet all expenses till recently. So, what has changed in recent times? The timeline below explains what happened and when these charges appeared suddenly.

In 2014, the Nachiket Mor committee made a recommendation to establish new types of banks so as to include the unbanked population and small businesses (those not a part of the banking system at that point). However, there was no safeguard in place to prevent these new banks from poaching the existing small deposit banking population. In addition, at around the same time, the government of India launched the ambitious Pradhan Mantri Jan Dhan Yojana (PMJDY) with the similar objective of financial inclusion. The platform was thus set with the opening of many new accounts in a short span of time. 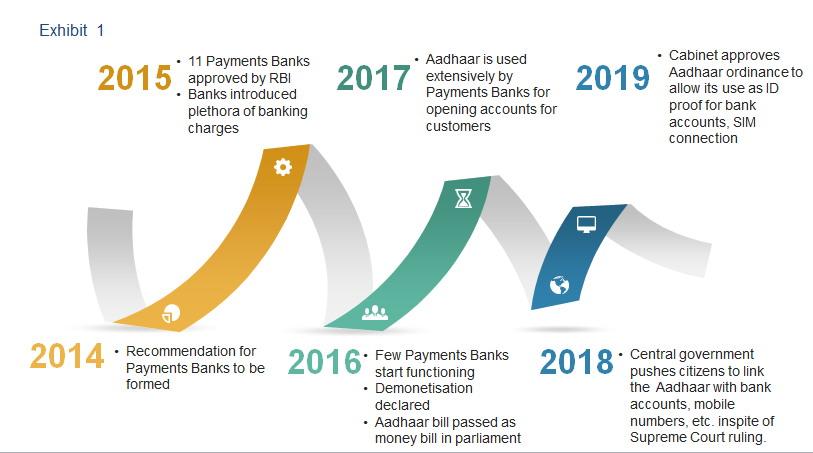 It was the general perception that there is a lot of black money in the form of cash with people, parties, lawmakers, bureaucrats, business houses and others, and the question was how to bring this cash into the formal banking channel. To achieve this, the government decided to adopt a  nation-wide disruptive model in the form of demonetisation. After demonetisation in 2016, banks incurred operational costs and hence it was difficult to manage the expenses. Further, there was pressure from private players to open the banking system to them and allot a quota of the small and medium sized customers.

Most of the small and medium sized customers were banking with SBI, not because of superior service quality, but because  SBI is a government-backed institution and has a far greater reach due to its brand name,. Therefore, in order to pave way for the payments banks, SBI initiated (re-introduced after 6 years in April 2017) the policy to start charging the small account holders. In the process, not only did the banks make money, but also helped payments banks grab the small customers. Payments banks offered zero balance accounts and no charge ATMs. The success of these banks depended solely on getting the accounts of those leaving traditional banks due to newly introduced charges for small deposits (minimum account balance).

The process of levying the charges by banks is far from transparent. The customer service in banks such as SBI is of little or no use in addressing service charges-related customer complaints. However, the initial charges were not sufficient, so charges were levied on each and every mode of transaction. Physical cash deposits and withdrawalsare also being charged with effect from April 2017.

Recognising the brand value of  nationalised banks, especially SBI, and people’s trust in them,  big corporates like Reliance got into a partnership with SBI. Reliance ensured that it kept the management control in its hands and at the same time, got SBI to inject maximum permissible money (30% is the maximum cap for minority shareholder) in the joint venture (JV). Thus was born (April, 2018) SBI-Reliance Jio Payments bank. SBI made 30% of total investment in this JV.

While SBI charges savings account holders for not maintaining minimum account balance and a host of other services, SBI-Reliance Jio Payments bank does not charge anything for the same services and provides a zero balance account. Thus, consumers are lured to open an account in the Payments Bank, whereas Clearly the brand, facilities, and customer reach of the biggest bank of the country is used to build a parallel empire and in the process harm the citizens of the country. As an icing on the cake, payments banks also sell financial instruments of the bigger traditional banks (such as SBI) and make money on the brokerage.

That is not all. The former chairman of the country’s biggest bank, seems to have been rewarded for this partnership! After exactly one year of retirement from SBI (mandatory cooling period), she has been included on the board of directors of Reliance. She was heading SBI when the bank started levying these charges and might have initiated and shaped the JV with Reliance when still in office (she retired in Oct 2017, Jio Payments bank became fully operational in Aug 2018 and she joined Reliance board in Oct 2018).

Demonetisation was also instrumental in pushing for the usage of digital wallets and to increase the customer base of these agencies. One can guess that this was done by design from the fact that generally the front page advertisements of big newspapers are booked in advance, however the morning after the announcement of demonetisation by the PM, the front pages of the nation’s biggest newspapers were full of advertisements by Paytm with PM Modi’s photo and congratulatory wishes. Forced usage of Aadhaar for verification further strengthens this conclusion that there is a nexus between these events (Aadhaar enabled registration of new users in a matter of seconds.)

In short, the launch of payments banks for small savings accounts, levy of bank charges on minimum account balance, and other services by traditional banks, PMJDY, and demonetisation are all linked. This lends credence to the theory that this is part of a greater conspiracy to weaken the public sector institutions and help the big corporates to cash in at the expense of public exchequer.

This blog, first published by CAG Chennai, can be accessed here.