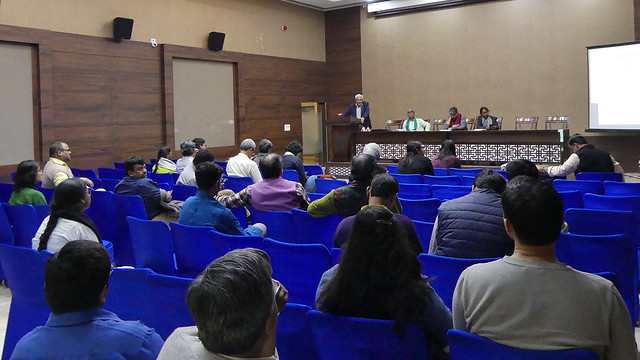 New Delhi, March 15, 2019: “The BJP, before the 2014 elections, created an illusion of achchhe din. Though they promised to double farmers income, increasing Minimum Support Price (MSP) by 1.5 times, they did opposite everything of what they promised.” said Vijoo Krishnan, Central Committee Member of CPI-M, and Joint Secretary of All India Kisan Sabha, at the at the public meeting titled Rebuilding from an Economic Earthquake at the Constitution Club of India today. “The rural distress reached to the unprecedented levels, which were also aided by the vicious atmosphere of the hate created by the cow-vigilantism,” Krishnan added.

The meeting, jointly organised by Delhi Forum and the Financial Accountability Network India, witnessed Vijoo Krishnan, Central Committee Member of CPI-M, and Joint Secretary of All India Kisan Sabha; Kavita Krishnan, Polit Bureau Member, CPI-ML Liberation; Dr Sunilam, Samajwadi Party; and Dinesh Abrol, Professor, Institute of Studies in Industrial Development looking back and evaluating the performance of the five years of the Narendra Modi government on the economy and the immediate agenda for the next government.

Speaking at the meeting, Dr Sunilam, a senior leader of the Samajwadi Party, claimed that the difference in the Minimum Support Price and the market price of the agricultural products is over Rs 50,000 crore, higher than the Union Agriculture Budget. Similarly, the rise in the oil prices and inflation — and payment of GST on the fertilisers and produce — has also considerably increased the input price.

Kavita Krishnan, a Polit Bureau member of the CPIM-L, remarked: “The last four years witnessed, rising inequality, bank frauds, bank charges, systemic destruction of the institutions like NSSO, and denial of the information on the social spending and other crucial data.” She emphasised, “The only people who got benefitted were the rich, and the PSUs like HAL, BSNL, which were doing financially well, today can’t even pay salaries.” She also extended support to the right to employment and food security as the constitutional right, and the introduction of the wealth tax and inheritance tax for the corporate sector.

Professor Dinesh Abrol observed that the future of the Indian economy and development had been adversely impacted due to the policies of the Modi government. This has resulted in declining household incomes, unemployment etc. Citing the survey done by the All India Manufacturers Organisation (AIMO), Prof Abrol said, “post demonetisation, micro and small enterprises have suffered 35 % job losses and 50 per cent dip in revenues. Likewise, the Economic Survey 2017-18 revealed that the credit disbursed by the banks shows that out of a total outstanding credit of Rs. 26.04 billion as in November 2017, 82.6% of the amount was lent to large enterprises, and MSMEs got only 17.4% of total credit.” All this worsened the unemployment.

Financial Accountability Network India (FAN India) a collective of civil society organisations, unions, people’s movements and concerned citizens to raise the issues of accountability and transparency of the national financial institutions. It also looks critically at the economic and financial policies that have an impact on the people. Currently, FAN India is involved in campaigning against the bank charges.

Delhi Forum since the seventies has been a support structure for social action groups and peoples’ movements from all over India.